My year so far in gifs

It's only February but I already feel like this year is full of stuff.

Lots and lots of stuff.

And I don't want to write the world's longest, most boring, blog post. Because as odd as it is (since I'm a writer), I truly do not like writing blog posts. Can you tell? I always try to find a way around it by doing video blogs or blogs full of pictures instead.

So today, here's all the STUFF from this year so far. In gifs.


So my friend who we'll call Sparkle Pony (that's her super secret code name), decided to do an awful thing and get me hooked on a TV show literally a few weeks before the release of "Under Zenith". Now that wouldn't be a problem if I didn't have things to do. You know... like actually promoting the release.

Anyway, as I was watching this show and saw Ian Somerhalder suddenly I realized he should definitely be Hayden in Under Zenith.

So because I have no self-control, I tweeted that I was mentally re-casting Under Zenith with @IanSomerhalder.

Yep. I tagged him.

So then someone who was actually ON Vampire Diaries started following me on Twitter, probably thinking I was actually casting something with Ian Somerhalder in it. And I may or may not have just let them think that.

Of course, it didn't take them long to realize I was just some no name writer who spends all of her time chained to her computer. So they Twitter dumped me via hitting that big "unfollow" button. And I pretended not to notice.

And that was my 3 days of almost knowing someone on Vampire Diaries.


As none of you probably know (because I never announced it on social media for fear a murderer would know I was alone and come kill me) The Husband was out of town for a week! Leaving me by myself mid-Vampire Diaries obsession. REALLY bad idea.

But in that time, when I wasn't watching The Show instead of writing, I had friends over. This is a good thing. Except for when big things happen online and you don't check your Facebook or e-mails for like 3 days.

Because then once the friends leave I do what I normally do at home by myself.

And then I FINALLY check my mail and five people have e-mailed me saying "Chasing June" is a finalist in the Whitney Awards and I missed the whole "Hey I got nominated!" party that the other finalists had on Twitter!

And because I missed it, I start thinking maybe I'm not really a finalist and people are just nutso.

Luckily, I checked the website and it's not a lie! "Chasing June" is totally a finalist in the Whitney Awards! So yeah. I'm pretty amazingly happy that I get to wear a fancy dress again and stalk other authors and just generally be way too excited about the whole thing!

"Chasing June" FOR THE WIN!

Third. Writing, promoting, and not being the world's biggest slacker.


"Under Zenith" comes out in three days (on February 11th!).

Let me repeat that.

UNDER ZENITH COMES OUT IN THREE DAYS!

And what have I done to promote it?

Okay, admittedly I've done a lot the past few days. But that doesn't really help much when I should have been promoting all along.

But here's the thing. I LOVE to write. I don't love promoting quite as much.

When people tell me promotion is part of being a successful author I give them this look (because I know they're right and I hate it).

I feel weird talking about myself and being like "GUYS BEST BOOK EVER RIGHT HERE GO BUY IT!!!!!!"

But you kind of have to do that if you want anyone to read your stories so that you can keep writing them.

So every time I sat down to promote "Under Zenith" and not let my publisher down immensely, I'd be really pumped and ready to go.

And I was surrounded by distractions I just couldn't get rid of!

And now my book comes out in three days and I'm starting to be really worried that no one even knows what in the world it is.

But hopefully this blog post will let you know that, in fact, you HAVE to read it. Because as much as I hate self-promotion, I LOVE this book. And I loved writing it so much that I seriously racked my brain to figure out a way to write a sequel (which luckily has happened).

So PLEASE check it out when it comes out on the 11th. Because I love it. And I'm awful at promotion. But it's still a really fun book!

And if it actually does well on launch day, then I can look at that pesky distraction I call the internet and say 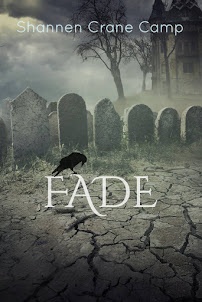 Shannen Crane Camp
Feel free to e-mail me at ShannenCBooks@hotmail.com